Why Slower, Lazier, Fatter Goalies Are Putting Up Better Numbers Than You Season After Season

The answer is their mobility.

Some of them are just naturally born with it, but most of them have discovered the secret to unlocking their hidden flexibility.

And I know it frustrates you to see that other goalie who is soft around the middle and not nearly as quick as you win game after game because he has that flat butterfly flare — he looks like Gumby out there.

Let’s Start By Taking A Look At How Your Current Mobility Training Measures Up:

Please don’t feel bad if your answer was “No” to every single one of these.  You aren’t alone.  Even most of the Pro goalies are in that boat when I first meet them; it is one of the first things we change. 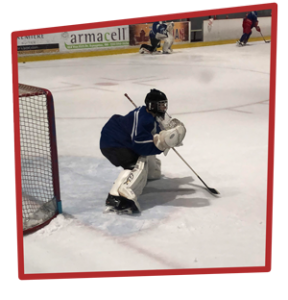 Robbie was actually quite flexible naturally.  Because he was so rubbery, he would use his flexibility as a crutch. Instead of positioning himself properly he would shoot his leg out or kick right out into the splits for save after save.

One time I counted 11 split saves (or attempted split saves) in one game.

It was exciting to watch for the crowd – the would cheer each time he made a highlight reel save… his goalie coach wasn’t cheering and neither was I.

But he could do it… sort of

You see, Robbie also spent more than 25% of his season nursing for hips or a sore groin or a tweaked hamstring.

He would have to ‘take it easy’ for practices and even miss some games at tournaments because he couldn’t trust his hips.

Those missed opportunities add up and other teams start noticing that he seemed to be ‘injured’ a lot.  He was a guy who was often the last cut because the coaches valued durability over those exciting split saves. 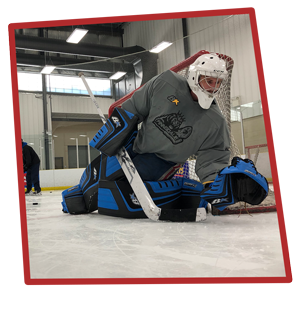 Especially as he moved up from one level to the next where the coaches better understood that a boring goalie is a more consistent goalie.  They started to understand that a goalie who looked like he was constantly getting hit right in the middle of the chest by the puck was the goalie they wanted.

And even though Robbie could sort of get away with it now, I wondered how long he would be able to abuse his hips, knees and ankles by relying on flexibility that he had no control over.

Would the extra wear and tear of smashing into his joint end range catch up with him when he was 22, 23 or 24… right when he was getting the biggest opportunities of his career?

That wasn’t worth the risk, so we set out a plan that would teach him to use his flexibility as a tool, with control and precision.  A plan that would develop the right stabilizing muscles to help absorb shock to the joints.

The plan was based on:

Robbie was diligent with the progressive training program as he built from one phase to the next.  He also spent more time listening to his goalie coach and practicing his positioning so he didn’t NEED as much mobility because he was getting square to the puck.

He had spent years practicing those desperation strategies, that they were his habit and it took time and patience to replace those inefficient patterns with more effective ones.

In the end he played a full season without missing a game or practice.  He got the opportunity he had missed out on the last two seasons and finally stepped up one level and hopefully we will find out this season that he is off to start his career as an NCAA goalie for the next step.

Let’s review exactly how I helped Robbie do it…